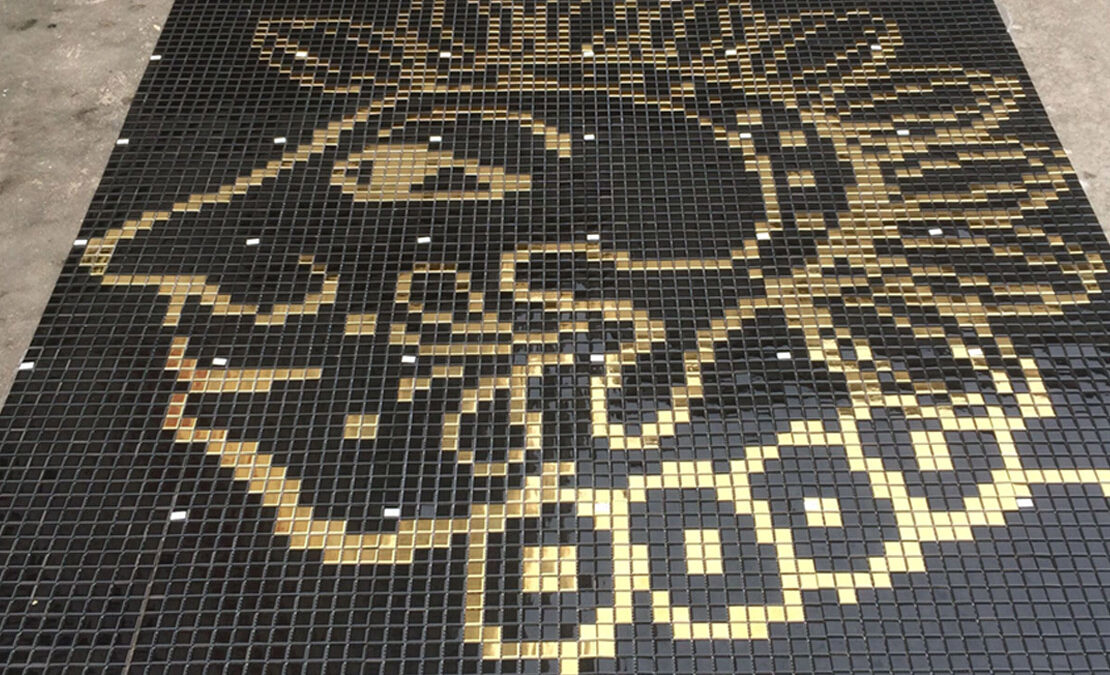 Chocolatier Van Dender – purveyor to the court since 2008 – has had a new, modern production area for several years now. For the new “chocolate factory”, the chocolatier wanted his logo and the text “Van Dender – from bean to chocolate” elaborated in golden mosaic stones.

A nice challenge for Impex: space was limited and the designer insisted that the stones should not be cut. After all, full stones can be grouted normally and that is easier to clean: in a room where food is processed, hygiene is a priority.

Drawing and text translated to mosaic

The Impex design team succeeded in designing the letters in a legible way, which cannot be taken for granted without cutting. In a base of black mosaics, the logo – the head of an Inca – and the text were “drawn” in gold-colored mosaic stones.

The gold-colored stones are made of porcelain, glazed on the top with shiny glaze. Both Aquacolor colors were carefully placed on nets, after which the nets were numbered. The mosaics could thus be attached to the wall in the correct order.

A classic Metro tile was placed around it, so that all attention goes straight to the mosaic.

This website uses cookies to improve your experience while you navigate through the website. Out of these, the cookies that are categorized as necessary are stored on your browser as they are essential for the working of basic functionalities of the website. We also use third-party cookies that help us analyze and understand how you use this website. These cookies will be stored in your browser only with your consent. You also have the option to opt-out of these cookies. But opting out of some of these cookies may affect your browsing experience.
SAVE & ACCEPT